BT to spend £6bn on superfast broadband and 4G rollout

BT, under pressure from rivals and regulator Ofcom, is to invest £6bn in improving its services, including extending superfast broadband and 4G coverage to more than 95% of the UK by 2020. The UK’s largest telecoms firm laid out its investment plans on Thursday as it reported a 15% rise in pre-tax profitsto £3bn for the year to 31 March, helped by stronger demand for its broadband and TV bundles. 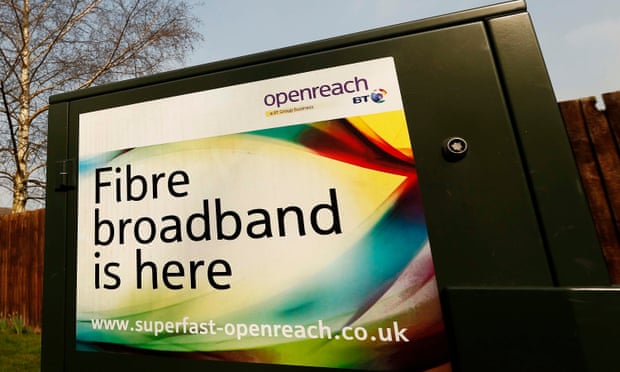 At least 10m homes and businesses are to get ultrafast broadband through a combination of fibre and copper technology called G.fast, with an ambition to reach 12m.

The group is laying even faster fibre-optic broadband lines (called fibre to the premises or FTTP) to 2m customers who want speeds of up to 1Gbps, mainly in new housing developments, high streets and business parks.

BT is also investing in customer service, and pledged within a year to halve the number of missed appointments at its broadband infrastructure division Openreach. It vowed to reduce the time taken to fix line faults by 24 hours as well as handling 90% of customers’ calls in the UK by March 2017.

Openreach is hiring 1,000 new engineers this year. Its head, Clive Selley, has promised customers “better service, broader coverage and faster speeds”. Earlier this year the telecoms regulator, Ofcom, stopped short of recommending that BT be forced to spin off Openreach, as demanded by rivals including TalkTalk and Sky. Instead, the regulator told BT to help rivals use its infrastructure to lay fibre cables that are faster than its own copper network, as part of a review  of Britain's broadband needs. It also demanded that the company improve broadband services of businesses by installing high-speed business lines more quickly and significantly reducing the price it charges rivals for the lines.

Analysts at Haitong Research said that despite BT’s investment plans and “Ofcom helping rivals get easier access to BT’s ducts and poles, we doubt that new large-scale networks will be built”. Rival Sky was not impressed.

Andrew Griffith, its chief operating officer and chief financial officer, said: ”Today’s statement shows that BT continues to see copper as the basis of its network for 21st-century Britain. Despite BT’s claims, it is clearer than ever that their plans for fibre to the premise (FTTP) broadband will bypass almost every existing UK home.
“This limited ambition has been dragged out of BT by the threat of regulatory action, demonstrating once again why an independent Openreach, free to raise its own long-term capital, is the best way for the UK to get the fibre network it needs.” BT’s £12.5bn acquisition of EE, Britain’s largest mobile phone network, was sanctioned by regulators in January.

The company said the integration of the mobile operator was going well. Its consumer business, which supplies broadband, telephone and TV services, posted an 8% rise in full-year sales to £1.2bn, as the number of TV customers grew 28% to 1.5m. BT Sport audiences are up 45%, thanks to its live coverage of Uefa Champions League and Europa League matches.

Openreach posted 415,000 fibre broadband net additions, and together BT and EE now control 81% of the market. BT’s chief executive, Gavin Patterson, said: “The UK is a digital leader today and it is vital that it remains one in the future … Networks require money and a lot of it. Virgin and BT have both pledged to invest and we will now see if others follow our lead.”

He added: “Customers want their broadband to be affordable as well as fast and we will be able to do that using G.fast.”

I’m looking for an investor partner for utilization of a 220 000 square meter land that is near Budapest 1 km far from the Danube. Or in any other case...